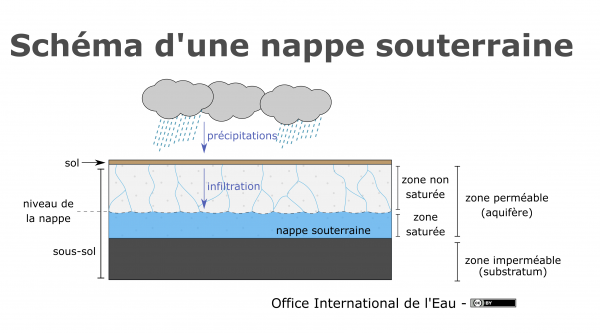 Area of ​​the subsoil in which the water completely occupies the interstices of the rock (aquifer) and is likely to move laterally under the effect of gravity and pressure gradients.

Source
According to BRGM and OFB
Sens technique

All of the water contained in a permeable fraction of the earth's crust which is completely soaked, as a result of the infiltration of water into the smallest interstices of the basement and its accumulation above an impermeable layer. Groundwater tables only form underground rivers in karstic areas. Groundwater corresponding to water infiltrated into the ground, circulating in the permeable rocks of the subsoil, form "reserves". Different types of aquifers are distinguished according to various criteria which can be: geological (alluvial aquifers - superficial porous media, aquifers in cracked environment - carbonate or eruptive, aquifers in karst environment - carbonate, aquifers in porous environment - sandstone, sand) or hydrodynamic ( alluvial aquifers, free aquifers, or captive aquifers The same aquifer may have a free part and a captive part.